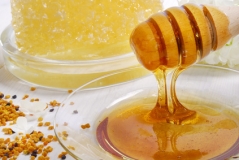 We offer quick, reliable detection of genetically modified pollen in honey. You can choose between two programmes:

In the event of a positive finding, the GMO must be specified and if necessary quantified.

When detecting genetically modified pollen in products containing honey, it must be taken into consideration that often, only a very small quantity of DNA from pollen is available for detection. And the amount of pollen in honey is only approximately 0.1 to 0.5%. If pollen from genetically modified plants is contained, the proportion of it forming the entire pollen content is in turn extremely small. Furthermore, when extracting DNA from pollen, the yield is comparatively small.

If you have any questions, our team would be pleased to assist you!